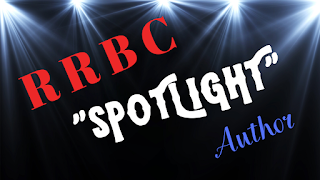 Hello, beautiful readers! Welcome to the #RRBC May "Spotlight" Authors blog tour! Today, I am sharing my space with authors Breakfield and Burkey! 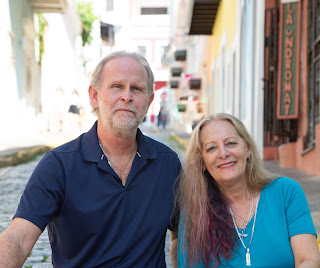 Today, they will be sharing with you one of their adventures in writing their series. Take it away, you two! :-)

The craziest thing we’ve done in the name of research
Authors Breakfield and Burkey
Breakfield and Burkey began writing it white papers for advanced degrees and inside a technology manufacturer as a part of work. As subject matter experts we became responsible for writing and reviewing technical documentation. The problem was the geeks in the backroom thinking up the technology were thousands of miles away, in Ireland, Galway to be exact.
At that point in time email was the main mode of business communication outside of a phone call, but with a 6 hours’ time differential. We would get information overnight and then proceed to test or update certain areas. It was a fairly good system which also allowed us to start early in our day before the rest of our normal central time zone work began.
We developed a significant appreciation for the work involved in programming complex applications. Agile programming was in early adoption by many who had innovative views to the future. We also found out these Cowboys of Ireland had a passion for pubs and Guinness. They claim their best ideas happen in the pub, where they could just sit around and chat without interruption.
Exchanges of updates to the documentation continued in remote fashion for several months with little snippets of exchanges via phone. Burkey was always fond of the phone calls and kept notes. As was later discovered, her notes were all around their accents, words used in conversation different from the States, and humor, especially when they told stories. She kept this a secret until we used several of these characters in portions of book 4 in the series, The Enigma Wraith.
As the relationships expanded through several application versions, the respect between the programming team and Breakfield and Burkey, grew to the point where additional exchanges were needed. Toward that end, Breakfield was invited to go to Galway to attend as well as lead several technology discussions. It was quite an honor for Breakfield to make the trek to Galway.
Travel was fraught with missing luggage, yet gracious help from everyone his path crossed made it less grueling. Lush countryside, ablaze with color on the long drive from the airport to the location, was dotted with cottages, friendly people in small villages, farm animals, and lots of local pubs. Stops along the way allowed a feel for the people as greetings were as if Breakfield was an old friend. Little did Burkey know at that time how much of these exchanges Breakfield committed to memory.
As the teams met with Breakfield for lively discussion, just like mind melding between high speed modems, of ideas, thoughts and innovation the mutual admiration expanded tenfold. After work, the evenings continued between Breakfield and the lads at several pubs. It is necessary to visit different pubs for special food to compliment the ever-flowing Guinness. This only added to the research Breakfield too kept hidden until the locations were used in the series in multiple books.
Breakfield and Burkey have continued to leverage these professional, now personal friendships, even as people have shifted in their careers. Burkey still is convinced she wants to do more pub research in Ireland. Who knows if that will occur?
Take care – Breakfield and Burkey! 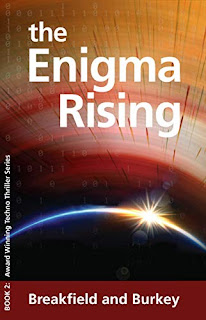 Breakfield and Burkey are the authors of the Enigma series. Pre-order your copy here.
Here is a little more information about them! :-)
Bio:
Breakfield, is a 25+ year technology expert in security, networking, voice and anything digital. He enjoys writing, studying World War II his­tory, travel, and cultural exchanges. He’s also a fan of wine tastings, wine-making, Harley riding, cooking extravaganzas, and woodworking.

Burkey, a 25+ year applied technology professional who excels at optimizing technology and business investments for customers all over the world with a focus on optimized customer experiences. She writes white papers and documentation, but has a marked preference for fiction.

Together they create award-winning stories that resonate with males and females, young and experienced adults, and bring a fresh new view to technology possibilities today https://www.EnigmaBookSeries.com.

Thanks for joining us today. Please enjoy the rest of their blog tour here.