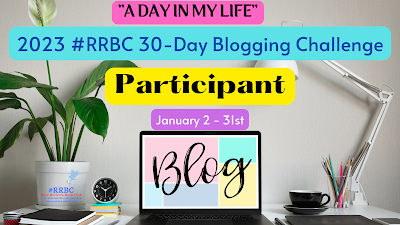 Today is Sunday, which is usually a beach day for me, but it was 51 degrees this morning with a high of 64, so the beach didn't happen. Even with the wind shields we put up on colder days, that temperature is just too cold. If it were 74 degrees, we probably would have gone, but that ten degree difference settles in the bones, so it isn't worth it.

Instead, I met with another group of friends for lunch. I have different friends from different parts of my life, and they rarely intermix. I have my beach/club friends, my work friends, my friends from high school/college, my childhood friends (scattered around the world), and random friends that I've met along life's journey. Today's lunch was with my college friends, specifically my sorority friends.

I never intended to join a sorority. I've always been a bit socially insecure. I know...I just listed a bunch of friend groups, but those groups are small, and it took me a while to open up and embrace those friendships. So, how did someone like me end up in a sorority?

As a freshman in college, I was working at a place called Discovery Zone. It has since closed down in my area. There was a girl there who was also starting the same university at the same time as me. So, we became friends and decided to venture into the college world together.

During our first semester, she became excited about the idea of joining a sorority, but she was nervous about going through the rush process alone. Rush is a time when you visit all the different sororities on campus. They try to convince you to join while also deciding whether they want to give you an invitation. I told her I wasn't really into the social scene, but she begged me to rush with her so she wouldn't be alone. So, I did.

The whole process was a bit overwhelming for me. I was used to having just a few friends that I hung out with, and now I had hundreds of girls trying to convince me that their sisterhood was where I belonged. At the end, my friend and I were invited to join one of the sororities, Phi Mu Fraternity.

I had felt a connection with a couple of the girls, and I loved their philanthropy endeavors and their motto. I just didn't know if it was for me. I always felt awkward in social settings (and still do sometimes). But my friend was so excited and wanted me to join with her so we could bond on another level, so I pushed down my insecurities and joined.

There were highs and lows during my college years in Phi Mu. The highs:

The lows were few but impactful. As with any time you get a large group of young girls together, there will always be a few who feel the need to tear others down to lift themselves up. I became one of their targets. I had no sense of fashion, so they would make comments on my attire often. I believed in following rules, and they enjoyed breaking them. I was shy and insecure, and they exploited that. It also didn't help that I didn't care whether I was in the 'in' group, so they did all they could to make me part of the 'out' group.

At the time, it was very hurtful. The friend that had convinced me to join wanted to be part of the 'in' group, so our friendship slowly dissolved. And yet, I had found a few girls that I felt at home with, and I was happy with that. Looking back now, I can see those experiences through the lenses of reflection and acceptance. I am happy I joined and experienced all that I did. It strengthened parts of me and helped guide me to become the person I wanted to be. I'm grateful for the sisters that are still in my life.

So, here is are a few pictures of my lunch group from today. We try to get together every few months to have lunch. It isn't always consistent, but we try. We had a great time hanging out, and even watched part of the Dolphins play off game. 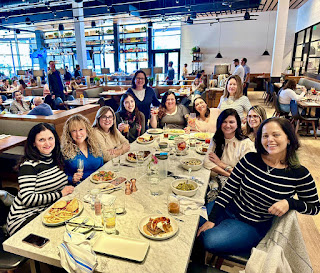 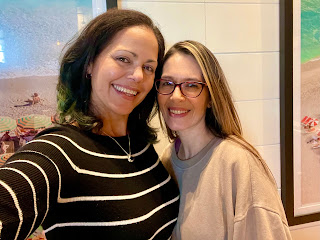 My big sis and I (sorority sis, not biological) 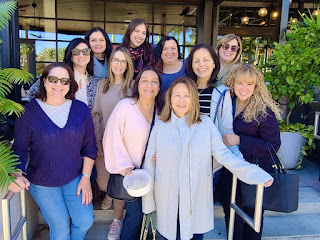 I am a HUGE Dolphins fan, win or lose. The game was at halftime when we left the restaurant, so I drove to my parents' house to watch the last half with my parents, sister, nephew, and niece. Unfortunately, we lost, but they gave a good fight, especially with a 7th-string quarterback.

When it ended, I ran a quick errand and then went home. I got another hour in at my part time job. I exercised inside again since it was too cold to be outdoors and then enjoyed my dinner and a show with my son.

Did you ever join a sorority or fraternity? I'd love to hear from you.