Welcome to Day 7 of the RWISA “REVOLUTION” Blog Tour! We’d like to introduce you to an amazing RWISA member, Author, Pat Garcia.  Take a peek at her writing below…

The Goal, The Purpose, The Contribution, and COVID19

Among the books that I have placed in collection boxes on my iPad, Don Quixote by Miquel de Cervantes is sitting in my favorite collection box. I read it for the first time in the print version of my first year at University.  It impacted my belief system, turned my way of thinking upside down, and challenged me to get my act together and do what I had been called to do.

Later, the song  To Dream The Impossible Dream that is so widely well-known from the musical Man of La Mancha, based on the Don Quixote, had me believing that I could take my experiences and reach what I saw them as the impossible star after I had failed at that particular moment in my studies and had been put on academic suspension for a year after my sophomore year.

During the year of my expulsion, Don Quixote worked on my imagination. I saw windmills in the form of words pouring into stories even though I had entered the dark night of the soul––the unknowing of not knowing where I was headed.  I got a job working for Gracewood State School and Hospital for the mentally and physically disabled. The children at Gracewood awoke that lively, precocious, impish, and headstrong child I had buried deep within me. Today, that child in me is still living. A year later, after my academic suspension, I returned to the University and completed my first college degree with honors.

My father asked me, after I had graduated, what took me so long? I never answered him because I didn't know then, and I still don't know.

I thought of this incident when RWISA extended to me an invitation to become a fellow member among such an elite group of writers.

My goal has always been to be the very best writer that I can be. To write all the books, I am carrying within me and leave behind a legacy for others brought up in environments like mine. To give them the courage to step out there and try to reach his or her impossible dream.

This is a long-term goal. It ends when I die. My purpose will be fulfilled, and the legacy must stand on its own. The plan I have keeps me faithful to myself. It can't be broken down into one year, five years, or even ten years. It is active until I expire.

The long-term goal influences my daily interactions with people. Having been blessed to write fiction, non-fiction, poetry, and sing, I can help others. I'm not looking to get rich, but I want to be able to help children and women in war-torn regions. I wish I could sponsor them all, but that is probably unrealistic. So, I do what I can and support as many as I can. The sponsorships will grow as I grow.

As COVID19 started last year, the organization that I sponsor through expected me to stop the donations until COVID19 has passed over. I didn't think that was the best solution and continued my sponsoring.  Each month I get a kick out of knowing that I am making a difference even though it is small.

Another important thing for me is getting people to open their eyes to see what is real and not accurate. Especially in these times, we need to recognize in our hearts that the world is not black and white. It is multi-colored, and it was created that way. This is the generator behind my purpose. I write Romance, Romantic Suspense, and Women's Fiction with a tad bit of fantasy. My characters are flawed, hurt, sometimes disillusioned, but they always find the connection to love and acceptance. They learn to cope with their idiosyncrasies and the idiosyncrasies of others without trying to change people.

Through COVID19, my characters are teaching me lessons that I am storing up for new books.

As my two friends from my allegory, The Child and The Prophet, will tell you in their own words below.

The Child lay on the lily pad singing a song as the ocean waves quietly moved her further on her destination. She'd forgotten how long she had been trying to get to the white house where her car was parked.

"Prophet?" she called out to the figure that had suddenly reappeared again. He was preparing her a delicious seaweed lunch.

The Prophet glanced up at the sky.  Dark, blue, the cumulus clouds were moving quickly above them. "Why do you want to know that, Child? Any particular reason?"

The Child' frowned. "I just think it's taking a mighty long time."

"What does undoubtable mean?"

"That's something you'll find out later."

What Pat has to say about RWISA... 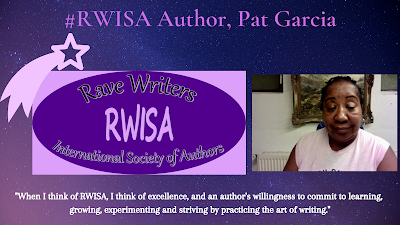 Check out her book...
Turn the Light On 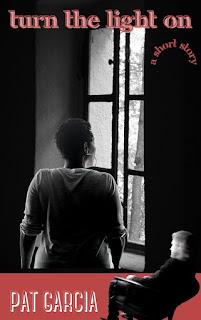 Now, we'd like to give you a chance at some of this awesome promotion for yourself!

Have you written that book or short story you want the whole world to know about? Are you looking for a great way to promote your creative endeavors? Perhaps you’re seeking to add some prestige to your body of work! If this sounds like you, we invite you to come on over to RAVEWRITERS – INT’L SOCIETY OF AUTHORS, otherwise known as RWISA.

At RWISA, we invite to membership only the very best writers the Indie community has to offer.

If your work is exemplary and speaks for itself, stop by the RWISA website today at RaveWriters.wordpress.com and find out how you can submit your sample of writing for consideration.

We’re an exclusive bunch but we’d love to have you join us!

NOTE:  If you’re looking to improve your writing while taking another route to membership into RWISA, while you’re at the site, visit RWISA UNIVERSITY!

Posted by Yvette M Calleiro at 6:39 AM