Hello, beautiful readers! I have such a treat for you today. I'm sharing with you the author of the Best Book Cover winner, Roberta Eaton Cheadle! She is on tour promoting her award-winning novel, A Ghost and His Gold.

GIVEAWAY: Just by leaving a comment below, you can win one of four e-book copies of A Ghost and His Gold! 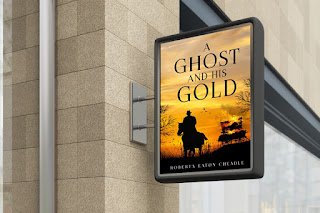 Michelle is the main character of the book. She is a qualified chartered accountant, as is her older husband, Tom. Michelle has left mainstream accounting, which she finds stifling, to run her own small bookkeeping company and writes in her spare time. Michelle is not a feminist, preferring to allow Tom to be the main breadwinner of her small family. She is devoted to her husband and is blinded to his darker side.

Michelle’s creativity and open mindedness to various methods of divination, such as Ouija boards and tarot cards, enable her to see beyond the obvious and detect the presence of the ghosts of Pieter and Robert, as well as the poltergeist, Estelle.

Michelle is drawn into the world of the three ghosts and is the vehicle through whom Pieter hopes to find redemption from the terrible burden of sin which binds him to the physical world as a ghost. As Michelle embarks on a journey to unravel Pieter’s story, she also learns the circumstances of both Robert and Estelle’s untimely deaths and the reasons for their grudges against Pieter, and in Estelle’s case, men in general.

The entrance of these three ghosts into the lives of the Cleveland’s has a huge impact on Tom, who has his own dark secrets.

Michelle is the character who experiences the most growth in the book as she tries to help Pieter and Robert find peace and faces the deterioration in her husband’s mental health as his haunting progresses.

“Entering the bathroom, Michelle turned on the shower tap. Pulling off her tee-shirt, damp with sweat, and stepping out of her jeans and under-pants, she reached into the shower and felt the temperature of the water. Warm. A sigh of pleasure escaped her as she stepped into the fast flow, closing her eyes and enjoying the freshness of the water on her hot, sticky body.

A few minutes later, her feet were covered by water which was pooling in the bottom of the shower.

The drain must be blocked. Bugger!

Peering into the drain, water beating down on her exposed back, she saw the obstruction.

Hurriedly turning the tap off to prevent the water from overflowing the pan, she stepped out and wrapped herself in a thick towel. The water level had not dropped.

It must be well and truly blocked to stop the outflow so completely. I’ll have to go and find something to poke down the drain and try to unblock it.

After slipping on her light summer pyjama top and shorts, she headed downstairs with a plan to find the wooden skewers she used to test if cakes are baked. They are sturdy and long enough to push a little way down the drainage pipe.

Luckily, the package of skewers was near the top of the box containing her baking and cake decorating equipment and Michelle was soon on her way back upstairs, with the packet clutched in her hand.

She poked a skewer into the drainpipe. From this close she could see it was human hair blocking it. Grimacing in disgust she wriggled the skewer around and dragged out a clump of long, dark blonde hair. It was packed so tightly into the drain; Michelle thought the previous occupants of the house could not possibly have ever used drain cleaner or pulled the hair out by hand.

After repeating the process, several times, the drain seemed to be cleared of hair and the water started to empty out of the shower. The clumps of hair were quite revolting, mouldy and rotten, as if they had been there for years and years and not just a few months since the townhouse had been inhabited. The house had only been occupied for six months when the previous owner decided to sell.

Annoyed with herself for not thinking to bring a plastic shopping bag upstairs with her when she went down to fetch the skewers, Michelle hurried back downstairs. On her way back upstairs, she decided to ask Tom to take the bag outside when he returned home and put it into the outside dustbin. The hair revolted her, and she didn’t want to leave it in her kitchen overnight.

In front of the shower stall she gasped, shocked. The horrible clumps were gone. The drain was clean, shining brightly in the artificial light from the ceiling downlights. Leaning over the drainpipe she peered into the dark hole. It looks like a toothless mouth.

A burst of cold water from overhead made her jump and she leapt out of the shower stall at its sudden wet assault. Shock turned to annoyance as she realised it was only the shower that had come on. How on earth did that happen? I’ll have to ask Tom to have a look at it.”

After Tom and Michelle Cleveland move into their recently built, modern townhouse, their housewarming party is disrupted when a drunken game with an Ouija board goes wrong and summons a sinister poltergeist, Estelle, who died in 1904.

Estelle makes her presence known in a series of terrifying events, culminating in her attacking Tom in his sleep with a knife. But, Estelle isn't alone. Who are the shadows lurking in the background - one in an old-fashioned slouch hat and the other, a soldier, carrying a rifle?

After discovering their house has been built on the site of one of the original farms in Irene, Michelle becomes convinced that the answer to her horrifying visions lie in the past. She must unravel the stories of the three phantoms' lives, and the circumstances surrounding their untimely deaths during the Second Anglo Boer War, in order to understand how they are tied together and why they are trapped in the world of ghosts between life and death. As the reasons behind Estelle's malevolent behaviour towards Tom unfold, Michelle's marriage comes under severe pressure and both their lives are threatened. 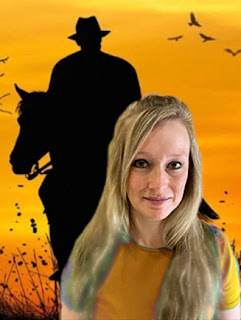 Roberta Eaton Cheadle is a South African writer and poet specialising in historical, paranormal, and horror novels and short stories. She is an avid reader in these genres and her writing has been influenced by famous authors including Bram Stoker, Edgar Allan Poe, Amor Towles, Stephen Crane, Enrich Maria Remarque, George Orwell, Stephen King, and Colleen McCullough.

Roberta has short stories and poems in several anthologies and has 2 published novels, Through the Nethergate, a historical supernatural fantasy, and A Ghost and His Gold, a historical paranormal novel set in South Africa.

Roberta has 9 children’s books published under the name Robbie Cheadle.

Roberta has worked in corporate finance from 2001 until the present date and has written 7 publications relating to investing in Africa. She has won several awards over her 20-year career in the category of Transactional Support Services.

To follow along with the rest of the tour, please visit the author's tour page on the 4WillsPublishing site.  If you'd like to book your own blog tour and have your book promoted in similar grand fashion, please click HERE. Thanks for supporting this author and her work!

Posted by Yvette M Calleiro at 5:56 AM